The organisation of the MSXdev’05 game development contest has asked me, Patriek Lesparre (aka GuyveR800), to judge all entries and appoint winners in two categories: Best Game and Most Original Game Concept.

For those who don’t know me, a few highlights of my MSX history, which started in 1986. In 1992, I founded TNI (aka The New Image) and launched TNI BBS, which was popular among many now well-known MSX people throughout the 1990′s. TNI released its first producton the MSX fair of Zandvoort 1992 and many products have followed since. TNI has always tried to push the envelope, doing new things and making the impossible possible. More about TNI on its website : http://www.tni.nl/

In 2002 the IRC channel #msxdev was founded by me and a few others as an on-topic alternative to #msx. You can find #msxdev on the Rizon IRC network, it has turned into a great place to get help on MSX programming, read the latest MSX scene news, but also for a fun chat with other MSX users.

Now on to the contest! I’ve played all games extensively and scored each game on five criteria: Visual, Audio, Gameplay, Originality and Polish. Bonus and penalty points were given where applicable. All scores are published below, but first: the announcement of the prize winners!

It gives me pride and joy to be able to appoint the winner of this magnificent prize. The five criteria were weighed and an overall impression was factored in. The nominees are all close together, but only one of them can be the absolute winner.

Nominees for this prize

Maybe future MSXdev’XX contest rules will allow you to use your prize to create games that use its full potential. A turboR ROM game, that would be something! In any case, I hope you will be able to continue the level of quality seen in this release and perhaps even improve upon it.

Perhaps in celebration of the anniversary of my enduring banishment from their site, MRC decided I should give away a prize in their name.

Their poor judgement of character, unsanctioned publication of copyrighted works and publishing of lies, calumny and defamatory texts, all continuing to this day, make this task leave a particularly bad taste in my mouth.

A fascist bribe consisting of a maximum of four MSX T-shirts.

Nominees for this prize

Regardless of this prize’s origins, I hope you will wear the MSX logo with pride and appreciate the irony of the fact that it stands for unification and harmony, while the sponsors of this prize seem hell-bent on establishing the opposite. May your efforts bring people closer! 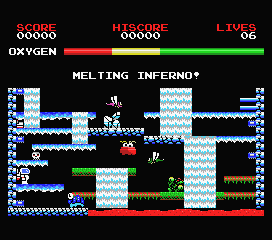 Does not participate in the contest, but is judged in its current state nevertheless.

This game was disqualified due to plagiarism.

* Depending on your MSX model, writing illegal values to PSG register 7 (specifically bits 6 and 7) can cause a short-circuit in your MSX. This can cause anything from non-working joystick to a broken MSX.

It has been a most productive contest this year! There were so many entries that it was not possible to properly judge them within the preset time. Congratulations to all contestants, the quality level of this year’s contest was very high. Special congratulations are in order for a few contestants who wrote their first game in assembly. Keep up the good work, everyone!

Some of the games were clearly written by talented people and are impressive in many areas, but issues in gameplay balancing and other such details prevent them from reaching professional quality levels. Coming so close is truly remarkable for such relatively small teams that made these games in their spare time.

However, not all was positive and happy. It appears the popular PT3 player is hazardous to our MSX system. Is this the Spectrums revenge or just careless programming? Hopefully this bug will be corrected ASAP and all programs that use it updated. The same counts for some other programs that made the same mistake.

If all contestants will continue to improve themselves and continue to be productive, great times are before us. Happy New Year and keep on MSX’ing!

Thanks to BiFi and Eduardo Robsy for additional compatibility testing.